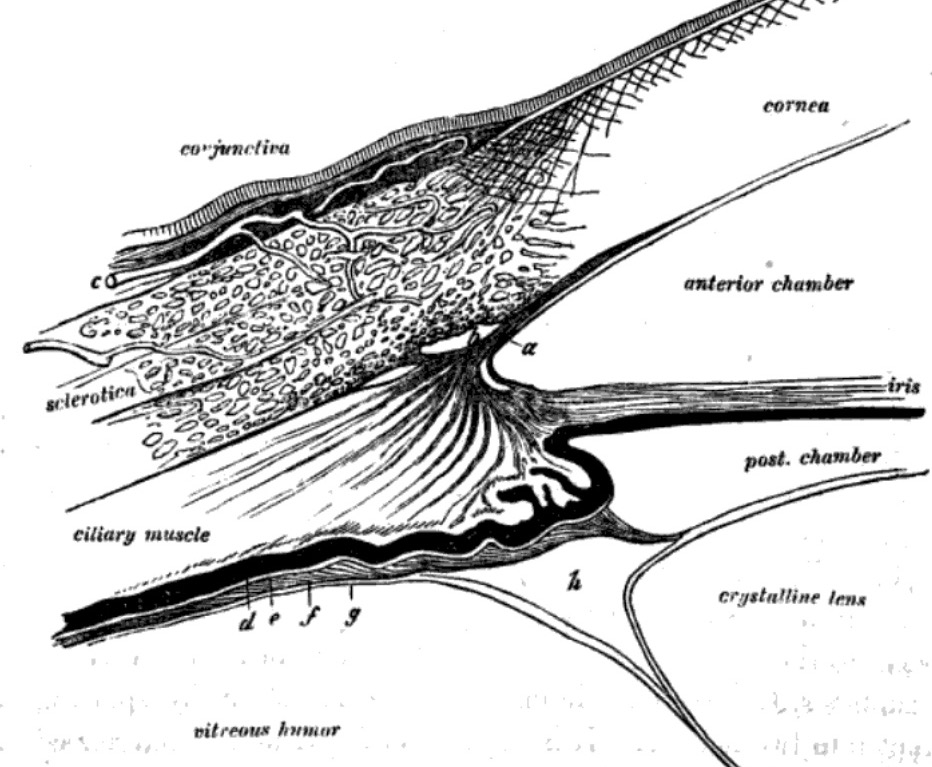 The name of William Bowman is perhaps most familiar for the eponyms "Bowman's capsule" and "Bowman's space," both in the kidney.  But Bowman is also commemorated in Bowman's membrane, the exceptionally thick basement membrane between corneal epithelium and substantia propria.  Bowman (b. 1816) initially gained fame (and election to the Royal Society) for his work on microscopic anatomy of muscle.

Apart from imaging technology (i.e., drawing rather than photography), Bowman's illustration of corneal limbus above (from p. 52 of Bowman's 1847 "Lectures on the parts concerned in the operations on the eye..." [1]) appears practically modern (cf, limbus on this website). 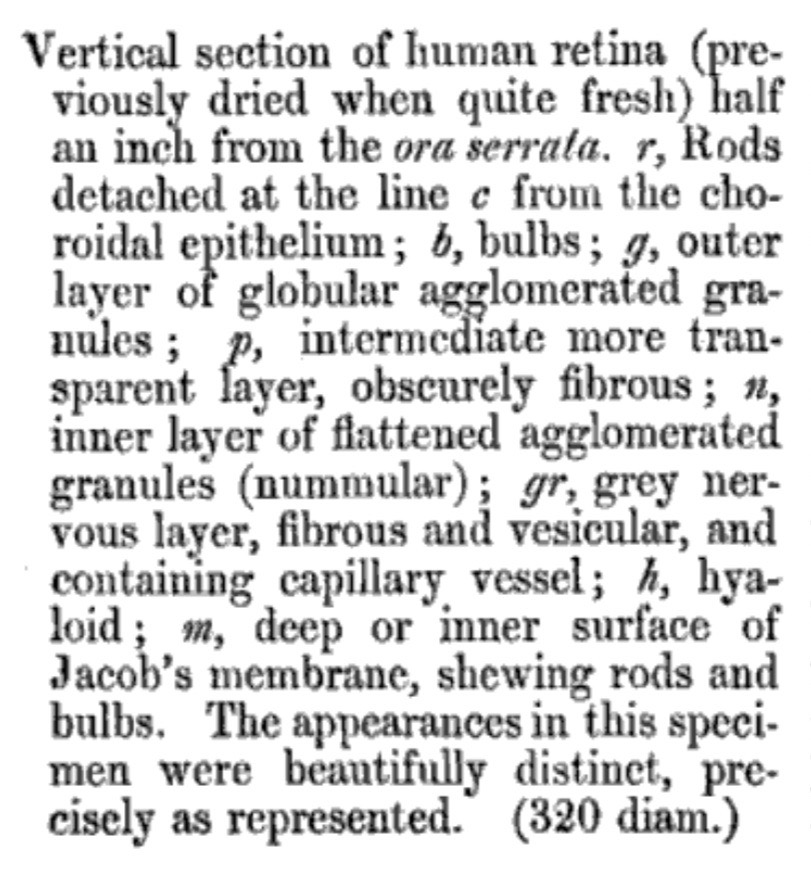 In contrast, the caption for Bowman's sketch of retina at right (from p. 85 in Bowman's "Lectures..." [1]) reveals his limited histological understanding of nervous tissue; Bowman worked long before Ramón y Cajal had elaborated the Neuron Doctrine.  The rod and cone outer segments are nicely drawn (cones here are called "bulbs").  But Bowman labels the outer and inner nuclear layers as layers of "g, globular agglomerated granules" and "n, nummular agglomerated granules," since he had not yet appreciated the unifying concept of cell nuclei in Cell Theory (ca. 1839).  He describes the outer plexiform layer simply as "obscurely fibrous," which in fact is how it still appears in routine histological specimens prepared without special staining (cf., retina on this website).  The upper sketch here, labelled m, represents a tangential section.

Jacob's membrane, mentioned in Bowman's caption to identify rod and cone outer segments, reflects Bowman's respect for prior work.  Although no longer in use today, this term commemorates Irish ophthalmologist Arthur Jacobs, considered to be the first to describe the retina microscopically, in 1819.

Entry for Bowman on eponyms page.

"Lectures on the parts concerned in the operations on the eye, and on the structure of the retina, delivered at the Royal London Ophthalmic Hospital, Moorfields, June 1847, to which are added, a paper on the vitreous humor; and also a few cases of ophthalmic disease," by William Bowman, F.R.S., Fellow of the Royal College of Surgeons of England; Professor of Physiology and General and Morbid Anatomyin King's Coll. London; Assistant-Surgeon to the King's College Hospital, and to the Royal London Ophthalmic Hospital, Moorfields.  Printed for Longman, Brown, Green, and Longmans, 1849.  [available at Google Books]