"Histology is an exotic meal, but can be as repulsive as a dose of medicine for students who are obliged to study it, and little loved by doctors who have finished their study of it all too hastily.  Taken compulsorily in large doses it is impossible to digest, but after repeated tastings in small draughts it becomes completely agreeable and even addictive.  Whoever possesses a refined sensitivity for artistic manifestations will appreciate that, in the science of histology, there exists an inherent focus of aesthetic emotions." 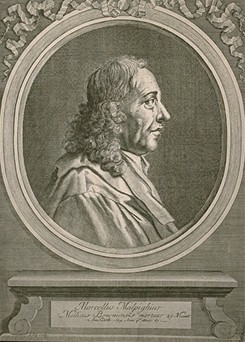 Why ask this question?  Some physicians and medical educators of my acquaintance regard the role of histology and microscopy to be marginal at best, if not altogether useless.  Should medical students take time away from obviously important topics to learn such an "irrelevant" skill?

In the 17th Century, the weight of ecclesiastical and philosophical authority cast doubt on the value of a microscopic perspective.  For example:

Marcello Malpighi introduced microscopy to medicine, discovered capillaries, and described renal corpuscles (among many other things) and by so doing offended his learned peers.  "In 1689, in the awesome presence of ecclesiastical dignitaries, a full-scale formal indictment was pronounced on Malpighi at Rome... Four theses, devised and defended by one of his own students, condemned Malpighi's rash work and pronounced it all useless... 'It is our firm opinion that the anatomy of the exceedingly small, internal conformation of the viscera, which has been extolled in these very times, is of use to no physician' " [quotation from The Discoverers, by Daniel J. Boorstin, 1985, Vintage Books, p. 382].

Renowned philosopher John Locke also remained unconvinced of the value of microscopy, insisting in his Essay Concerning Human Understanding (1689) that "if we had microscopes for eyes, the knowledge we gained would be useless...  God, in fact, has adapted our senses to our needs.  Consequenty, microscopical science is 'lost labour'" [quotation from Bad Medicine: Doctors Doing Harm Since Hippocrates, by David Wootton, Oxford U.P. 2006], this in spite of visiting Leeuwenhoek and seeing microscopic creatures for himself .

But by the end of the 18th Century, Bichat ("the Father of Histology") had recognized not only that organs were composed of more-fundamental simple tissues, but also that pathology was commonly localized to or limited by specific types of tissue.  By calling attention to the tissue level of bodily organization, Bichat began a profound shift in the focus of attention for anatomy, physiology, and pathology.

While it is doubtless true that many doctors seldom if ever use a microscope after medical school, nevertheless many physicians and medical educators cannot imagine becoming adequately educated in medicine without a rich perspective on tissue-level organization.  Perhaps these are the physicians who, as students, were successful at integrating histology into their broader understanding of the human body (see How to study Histology; also see What are the core concepts of histology?).

Many aspects of bodily function (e.g., inflammation, neoplasm) cannot be understood without such a histological perspective.  Certain diagnostic procedures depend critically on knowledge and skill at microscopic observation.  And autopsy, complete with microscopic examination, still provides the "gold standard" for determining whether diagnosis and treatment have been appropriate.  Expertise in histology (and histological pathology) is essential for thorough autopsy.

Unfortunately, routine autopsy is growing unfashionable.  Doing an autopsy incurs the risk of discovering that "mistakes were made" (e.g., incorrect or incomplete diagnosis, or inappropriate treatment).  The easiest way to avoid such bad news is to omit the procedure, based on the supposedly economic rationale that routine autopsy represents an "unnecessary cost."  Medical students are taught to consider costs as well as patient benefits before ordering any procedure.  And, rather obviously, the procedure of autopsy cannot help the deceased patient; furthermore, it might even disturb members of the patient's family.  However, without the potential discovery that autopsy can provide, mistakes may go undetected and corrective steps cannot be taken.

The real question concerning the mastery of histology is a matter of time.  Do medical students have enough time to learn histology?  Does any student have enough time to learn all the valuable knowledge and skills which can support the effective practice of medicine?  If not, what then?  Should one's training be broad and thin or deep but spotty?  And, if spotty, what should be left out?  No one knows the answers to these questions (although there are many strongly-held opinions).

Meanwhile, we proceed with the curriculum as it currently exists, including histology.

Are virtual slides enough?
(Rebecca L. Pratt, 2009:  "Are we throwing histology out with the microscope? A look at histology from the physician's perspective," Anat Sci Educ 2:205-209.)

Some of these are obvious, some are more subtle.  Choose the reasons that work best for you.  (Click on "more" for expanded explanation.)

Next question:  How should histology be studied?

The pleasure of learning is, for some, a fully sufficient motive for studying histology (or anything else).  As quoted at the top of this page, "Whoever possesses a refined sensitivity for artistic manifestations will appreciate that, in the science of histology, there exists an inherent focus of aesthetic emotions."

For others (i.e., for those of you who have so far found remarkably little joy in histology), this might seem to be the weakest conceivable reason.  But keep trying; histology might grow on you.

In any case, this rationale applies equally well to any of the many delights available in the medical curriculum.  It thus provides little guidance for budgeting one's study time.

It is impossible to appreciate the normal functioning of many organs -- such as lung or kidney or liver or brain -- without some detailed knowledge of how their cells are organized into tissues.  In such cases, specific facts from histology provide essential strands in a web of understanding.  And some important clinical processes, notably inflammation and neoplasm, are essentially tissue-level phenomena.

However, although a utilitarian rationale may appear quite solid for certain bits of histological information, the utility for many other bits may be indirect and more difficult to perceive.

Not all useful ideas are "critical" like each link in a chain.  Understanding often has a structure more like a net, wherein interconnected ideas mutually reinforce one another and provide multiple routes of access to particular information.  Although a chain fails if any link breaks, a net can function fairly well even if several strands are missing.  Nevertheless, the virtue of a net can only emerge from the presence of many interconnected strands.  Any one strand may appear irrelevant or dispensible . . . but the more strands, the better.  Adequate study of histology can provide several such strands.

Furthermore, the direct utility for much histology may not become apparent until after the best opportunity for study has passed.  A rich understanding of histology helps sustain a deep appreciation of inflammation, tissue repair, and neoplasm ... but these clinically significant topics are currently not emphasized until the Year Two curriculum.

If in doubt, trust that the medical curriculum has traditionally valued histology -- including first-hand observation through the microscope -- for the unique perspective that it confers, regardless of concrete and specific applications.

Many patients need to understand what's going on in their bodies.  Some may ask about their cells and tissues.  Your ability to offer adequate explanation (both clear and correct) may confer an intangible benefit to your patients, even in cases where knowledge of particular histological details has little direct impact on immediate diagnosis or treatment.  Conversely, a dismissive reply ("Oh, you don't need to know those details") may undermine your patients' confidence and reduce your effectiveness as a physician.

All diseases result from disorders in cellular function.  This premise was put forward by Rudolf Virchow, the father of modern pathology.

"Life itself is but the expression of a sum of phenomena, each of which follows the ordinary physical and chemical laws. ... Disease is not something personal and special, but only a manifestation of life under modified conditions, operating according to the same laws as apply to the living body at all times, from the first moment until death." (Virchow)

Deep and detailed knowledge of histology, accompanied by well-honed skill at microscopy, is essential to the practice of histologic pathology.  Microscopic examination of tissue specimens is often necessary for appropriate diagnosis and treatment.  Furthermore, expert knowledge and observational skill is also essential for determining, post mortem by autopsy, just how appropriate prior diagnostic and treatment decisions have been.

For most physicians, such services are provide by specialists in pathology.  But those specialists acquired their expertise by beginning with undergraduate histology.

Even if you have no aspiration to become a pathologist yourself, your practice of medicine will often depend on appropriate communication with pathologists.  The better you understand the tools used by the pathologist, the more effective such communication can be.  And the better chance you will have of protecting your patients from possible errors or incompetence of the pathologist.

"To the ancient aphorism, 'first do no harm', should be added a modern extension:  compassion without competence is crap."  Michael B. Shimkin (NCI, NIH, author of Science and Cancer), as quoted by Ira Pilgrim.

Be aware that detailed knowledge of histology continues to be presumed by many USMLE questions.  If you aspire to score well on (or at least pass) this exam, you would be well advised to learn more histology than just the minimum required for passing the Year One curriculum.

Of course, if passing the USMLE were the only available rationale for studying histology, one might rightfully question this discipline's place in the medical curriculum.  However, this is only one among several reasons for appreciating this traditional body of knowledge with its unique perspective on the human condition.