REGIONS of the ear

OVERVIEW of the INNER EAR

The inner ear has a complex structure.  The following basic concepts should help organize that complexity.

The inner ear resides within a space called the bony labyrinth.

Suspended within the bony labyrinth, and approximating its shape, is an interconnected set of membrane-lined chambers and passageways called the membranous labyrinth.

Hair cells are the specialized mechanoreceptor cells of the auditory and vestibular systems.  Hair cells are found in several positions along the chambers and passageways of the membranous labyrinth.

Hair cells of the ampullae respond to angular acceleration (i.e., rotation of the head).

The planes of orientation of the semicircircular canals correspond to the planes of action of the extraocular muscles, allowing simple reflexes to coordinate eye movement with head rotation.  (Amazingly, at least to this writer, this correspondence has been maintained through evolution even while position and orientation of both eyes and ears have been modified.) 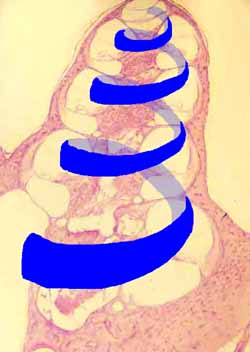 The cochlea houses an elaborate configuration of membranous labyrinth and hair cells, called the organ of Corti, designed for auditory reception.

The basic shape of the cochlea is that of a snail-shell, or tapering helix.

NOTE:  The human cochlea is short and broad, with fewer turns than shown here.  Micrographs at this website (as well as in many other references) show the cochlea of a laboratory rodent which is proportionately taller and narrower.

The spiraling tunnel (blue, in image at right) that forms the cochlea of the bony labyrinth is divided into three distinct channels by portions of the membranous labyrinth attached to bony ridges.  Each of these channels is called a "scala," meaning "ramp" or "incline" (think of a musical "scale").

The organ of Corti (commemorating Alfonso Corti, b. 1822) is an elaborate structure with more named parts than the rest of inner ear altogether.  Several key features are listed below.  Click on an image for an enlarged view.

Clinical note:  A cochlear implant is inserted into the scala tympani, where it lies close to the organ of Corti and can artificially stimulate axons of the auditory nerve.

The organ of Corti is considerably more complex than this simple account implies, with, among other things, two functionally distinct classes of hair cells (inner and outer).  Synapses from the inner hair cells apparently supply most of the sensory information that goes to the brain, while the outer hair cells (the ones which are most readily recognized by light microscopy) have a curious mechanical function.  (For more, see for example Inner and Outer Hair Cells, Baylor College of Medicine.)

Historical note:  Among the many histological details associated with the organ of Corti are eponymous structures commemorating Rosenthal, Reissner, Deiters, Claudius, Hensen, Boettcher, and Nuel.

Kölliker's organ, the embryonic precursor of the hair cells in the organ of Corti, may be the only eponymous structure in human anatomy to commemorate Albert von Kölliker, "the father of modern histology," who first described it in 1863.

The membranous labyrinth is filled with endolymph and surrounded by perilymph.

The distinction between endolymph and perilymph is physiological significant.

Endolymph (blue, in image at right) is a unique fluid, with high K+ concentration and very low Na+ concentration.  This endolymph provides the appropriate ionic environment for hair cell function.

Endolymph is produced continuously.  The outlet (or "drain") for removing endolymph is via the vestibular aquaduct into the endolymphatic sac, wherefrom endolymph moves into cerebrospinal fluid.

This is one of three sites associated with the nervous system where a special fluid is produced by a unique tissue, with this fluid needing an outlet elsewhere to avoid buildup of pressure.  The other two are the aqueous humor of the eye, produced by ciliary processes and drained through the canal of Schlemm; and cerebrospinal fluid of the brain, produced by choroid plexus and drained through arachnoid villi into the superior sagittal sinus.  In each of these sites, an imbalance between production and drainage can cause neurological symptoms.

Perilymph (orange, in image at right) is similar to ordinary interstitial fluid.  Perilymph fills the spaces of the bony labyrinth surrounding the membranous labyrinth.

In the vestibular system (surrounding the saccule, utricle, and semicircular canals), perilymph simply provides a cushioning support for the membranous labyrinth.

In the cochlea, perilymph of the ascending scala vestibuli and the descending scala tympani conveys pressure waves (sound) across the scala media.   Pressure waves flex the basilar membrane and thereby stimulate hair cells of the organ of Corti.