Many of the body's cells secrete substances which influence other cells, either locally or at some distance.  Cells which are conspicuously specialized for this function are called endocrine cells.  (The suffix -crine refers to secretion; the prefix endo- tells us that the secretory product stays inside the body.)   All endocrine cells share certain characteristics. 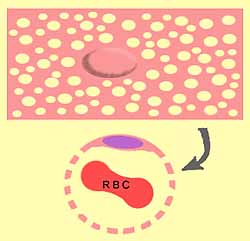 The various endocrine cells of the human body are organized in a few distinctive patterns.

The epithelial nature of these cells is reflected in their organization into cords or clumps, with cells attached laterally to neighboring cells as in surface epithelium.  But because there is typically no lumenal surface for endocrine secretion, there is no apical/basal polarization of cytoplasm.  (An exception is the thyroid, where proper cuboidal epithelium does form follicles into whose lumens thyroglobulin is secreted for storage.)

With the exception of adrenal cortex (which is mesodermally derived), these glands are all of ectodermal or endodermal origin.  Remnants of embryonic origin may occur in the form of displaced glandular tissue or ducts, especially with the adenohypophysis or the thyroid.

Both neurohypophysis and pineal originate from the diencephalon and have organization typical of nervous tissue.  Secretion is from axon terminals.  Secretory cells (neurons) are supported by glial cells.

Finally, INDIVIDUAL CELLS may have significant endocrine function.  Examples include the epithelial enteroendocrine cells of the GI tract and the juxtaglomular cells (modified smooth muscle) of the renal cortex.

Overview of Individual Endocrine Glands
(For additional detail, click on the name of the gland.)

The anterior pituitary appears glandular (hence adenohypophysis), with clumps of epithelial cells with varying staining properties.  Cells of several species each secrete one of several hormones (e.g., GH, ACTH, FSH, LH, TSH, etc.)  Such secretion from this "master gland" regulates most other endocrine glands and is, in turn, regulated by factors secreted by hypothalamic neurons and delivered to the anterior pituitary by the hypophyseal portal vessels.

Pituitary adenomas may be "benign" (i.e., not malignant) but can nevertheless cause significant problems either from excess hormone production or from mass effect (e.g., crowding the optic chiasm).  For illustration, see WebPath.

The thyroid consists of characteristic follicles, each with a large lumen surrounded by a simple cuboidal epithelium.  The appearance (as well as evolutionary origin) is that of an exocrine gland which has lost its outlet so that secretory product accumulates in the follicles.  Follicular cells store thyroglobulin in the follicles for subsequent use in production and endocrine secretion of T3 (thyroxin) and T4.  Parafollicular cells (C cells) produce calcitonin.

The parathyroid consists of several discrete glands, each organized into tangled curvilinear cords of chief cells.  These cells secrete parathyroid hormone, which works in opposition to calcitonin (from thyroid C cells) to regulate blood calcium levels.

Pancreatic islets (also called islets of Langerhans (named after Paul Langerhans, b. 1847) are nests of endocrine cells scattered within the pancreas.  Each islet consists of several cell types which secrete insulin, glucagon, somatostatin, and pancreatic peptide.  The cells are arranged into tangled cords.

The adrenal consists of two distinct parts, an outer cortex and an inner medulla.

The cortex consists of cords of steroid-secreting epithelial cells, separated by parallel sinusoids.  The cords are organized into poorly defined zones.  From the outside inward, these zones secrete mineral corticoids (e.g., aldosterone), glucocorticoids (e.g., cortisol), and androgenic steroids.

The medulla consists of cells similar to sympathetic neurons which secrete catecholamines (epinephrine and norepinephrine).

The ovary includes steroid secreting cells of the theca interna and of the corpus luteum.

The pineal consists of pinealocytes, neuron-like cells which secrete melatonin.  Calcium accumulation ("brain sand") in the pineal gland makes this structure a useful landmark in x-rays.  For images of pineal, as well as more information, see LUMEN or Wikipedia.

Historical note:  According to Rene Decartes, it is through the pineal that the soul controls the body.